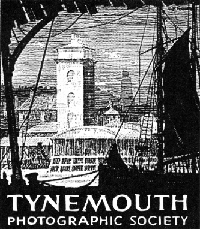 This addition to the main history was written by Margaret Warren in 2013.

Recent research in the club archives has turned up the 1894 syllabus for an earlier club, the "Shields (formally Borough of Tynemouth) Camera Club". The club rules stated that membership was by ballot and one black ball would exclude a person from membership. Its President was Walter F. Corder, who later became the first President of Tynemouth Photographic Society in 1903.

Walter Corder died aged 71 years in July 1933. His obituary was published in the Shields Weekly News and from that and other sources in the local history section of North Shields Library we have discovered that he was born on the 27th October 1861 in Sunderland, the second son of Alexander Corder. The Corders were a prominent Quaker family, so young Walter was educated at the Friends' School in Wigton and later at Armstrong College. Between 1883 and 1885 he was apprentice to his uncle Octavius Corder in Norwich and eventually in Kendal.

In 1885 he moved to North Shields and by 1887, he was running two pharmaceutical chemist businesses in the town, one at 22 Albion Road and the other at 83 Tyne Street. He soon realised the possibilities of treating fish processing waste and founded the North Shields Guano Works at the Low Lights on the Fish Quay. The smell emanating from the work was appalling and the Shields Weekly News, on the 4th September 1895, reported that Mr Corder (who was already a JP) had received a summons for having "caused a nuisance to exit from his premises". Residents from various areas of the town were called to give accounts of the effects the stench was having on them and Mr Corder was given 3 months to abate the nuisance. The smell from the works continued to cause problems in North Shields and Tynemouth well into the 1960s.

Sometime before the 1st World War, Mr Corder gave up his connection with the Guano Works. He then joined a Mr Robert Williamson in his gelatine and glue manufacturing business at Wallsend. After the war this business was merged with several similar manufacturing companies and became British Glues Ltd. Mr Corder was appointed its first Chairman. Owing to ill health Mr Corder retired from active participation in business several years before his death.

He was a staunch Liberal and took an active interest in the affairs of Tynemouth Liberal Association. He had continued to be a magistrate until pressure of work caused his resignation.

As well as being a keen amateur photographer and the first President of Tynemouth Photographic Society and the Northern Counties Photographic Federation, he had other interests. He was President of the Tynemouth Amateur Operatic Society and a supporter of the Newcastle Bach Choir. He was a member of the Newcastle Society of Antiquaries and between 1903 and 1912 was active at the excavations at the Roman Fort in Wallsend, where he took many photographs of the dig.

He married Margaret Lindsay Watson on the 26th August, 1891 with whom he had a son and a daughter. At the time of his death he was living with his wife at 4 Rosella Place, North Shields and both his children were married.

Unfortunately, we have not been able to find out anything about the demise of the first photographic society of which William Corder was President. That will require further research.