The Video Film-making Group meets in the club rooms on Monday evenings at 7:30 pm. More details can be found in the current SYLLABUS [PDF] .

The group has its own web site at tynemouthvideogroup.weebly.com/ where some of their videos may be viewed.

The best films of the season were revealed on 8th April when Graham Relf judged our Annual Competition which had 11 entries.

First place went to new member Jim Shaw for his film 'Lesley and Friends', a documentary which cleverly blended some lovely close-up footage of swans with step-by-step views of his partner Lesley, an artist working in pastel crayons, as she recreated a beautiful swan portrait. Jim will be receiving the George Draper Shield at our Presentation Evening on 29th April.

Second place was awarded to Trevor Ermel with 'Paradise', a sort of 'pop video' featuring three grandchildren, with some fast editing to the soundtrack by George Ezra.

Third place went to Alwyn Scott, another member new to Tynemouth this season, with 'Teddy's Secret', a clever 'stop-motion' film about the antics of a teddy bear while his owner was out of the house.

The other trophy to be decided that night was the Kip Halsey Award for the film with the best nature content, which went to Trevor Ermel for his film 'Fly Away'. This was the tale of two herring gulls chicks which hatched on his rooftop and which were filmed over the course of the next five months from his back garden until they, well, flew away!

Considering Graham 'had not judged anything' previously (his own words!) his comments were very well received by the bumper audience of 17 in attendance that evening and everyone agreed it was an excellent way of winding down the video season, with only the AGM and Presentation Night to come. Our thanks go to Graham for the obvious care he had taken in assessing our entries and for his presentation of them.

Trevor Ermel recently entered a film on behalf of the Video Film-Making Group into a competition organised by Swan Moviemakers, in the IAC's North West Region. This was for a trophy in memory of a former Swan Moviemakers member who had previously worked for the BBC and ITV as a scriptwriter and actor - 'The Ray Dunbobbin Award for Best Original Script'.

Our film was Dave Peffer's 'The Dream', a period drama about the young boy whose hopes of competing in the forthcoming Olympic Games were shattered by **SPOILER ALERT** the outbreak of the First World War. (Although this wasn't revealed until the final shot there were enough clues leading up to it to enable some viewers to anticipate the outcome.)

I am delighted to announce that the film was awarded first place in the competition, so congratulations are in order to Dave Peffer, who wrote the script and narrated the voiceover, Reg Checkley who was one of the actors involved and Trevor Ermel who filmed and edited it.

We understand that the trophy will remain in the care of Swan Moviemakers but we are expecting to receive our First Place certificate in the post after the screening of the films at their clubrooms in Cheshire on 12th April.

The picture shows the winning members being presented with the certificate by the NECA President. (Photograph by Steven Wears)

From the left are: John Burton (who provided two short comedies, 'Teething Troubles' and 'A Welcome Drink'); Alwyn Scott ('The Lighthouse', filmed at Tynemouth on a very stormy day with an atmospheric sound track and self-penned poetry); Tynemouth Chairman David Peffer (writer of the club film 'Next, please'); Brian Dunckley, NECA President; and Trevor Ermel ('The Pudding Run', an account of the 2018 Boxing Day fun run in Whitley Bay and 'Fly Away', the story of two herring gull chicks filmed over a five month period in his back garden). 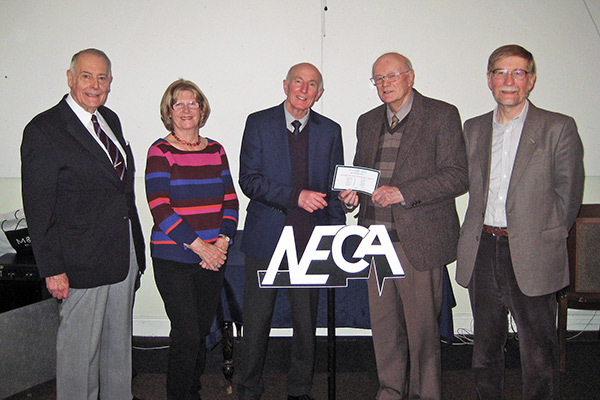 The 2018 British International Amateur Film Festival saw successes for two members of this group. David Peffer & Trevor Ermel jointly got a 4-star award for their 1-minute comedy "The Critic". Trevor also got a 3-star award for his 9-minute documentary "Bell Ringers of North Shields"

TYNEMOUTH VIDEO FILM-MAKING GROUP were the proud winners of a 20 minute programme competition with films produced by their members. The certificate was presented to the Group's chairman Doug Tweddle by Brian Dunkley, President of The North East Cine (&Video) Association which holds this competition annually.

Each club provides a minimum of 2 films in their programme to give a maximum running time of 20 minutes. They are carefully considered for quality, content, and overall entertainment value. The films have no subject restriction and were judged by well-known I.A.C., B.I.A.F.F., and U.N.I.C.A. judges Annabelle & Reg. Lancaster in London.

Our entry consisted of 4 films, Trevor Ermel's "Croation Contrasts", "Alfie & The Kaiser" by Doug Tweddle, and secretary John Burton's "Weally?" Film number 4, "Lost In Translation", was a group comedy written by David Peffer, filmed by Trevor, with David & John as the cast. 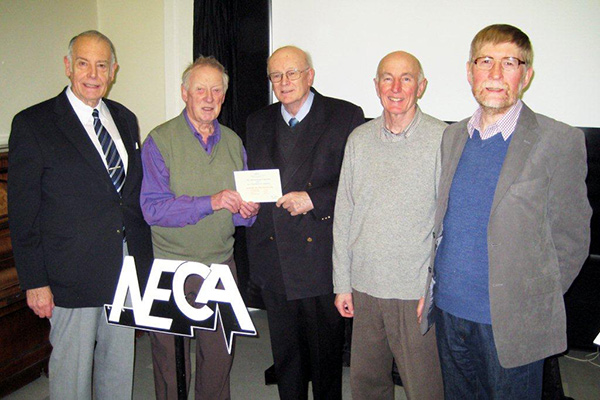